Located in Nauvoo's Historic Downtown District, Nauvoo Temple House - formerly The Woodruff Hotel - welcomes its guests into the original 1871 Temple House building. Recognized in the National Registry of Historic Places, and standing high among the city's revered landmarks, this special Nauvoo hotel is named after one of Nauvoo's early distinguished and beloved residents. . . Wilford Woodruff. 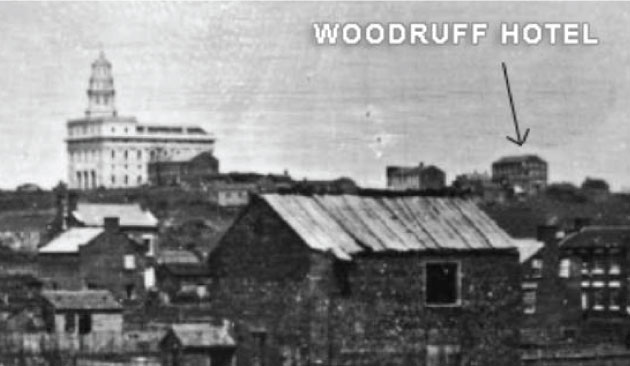 The site where Nauvoo Temple House is located has long been a recognizable place in the history of Nauvoo. As depicted in an early photo of the original Nauvoo Temple, the beginnings of the hotel can be seen as early as 1847. As the small city grappled with the sudden exodus of almost all her citizens, many buildings quickly fell into severe dis-repair or were vandalized by mobs of those who didn't build them and therefore didn't love them. In 1871 John Engler took up the cause to beautify Nauvoo and commissioned Michael Baumert Sr. to salvage what he could and build what would come to be called the Temple House . . . So named because of its matching unique round-topped gothic windows, which were seen on the clock tower of the original Nauvoo Temple. These windows are still in the hotel today. In the 1800's the word "house" was used for hotels and other large public buildings such as a schoolhouse, publishing house, or carriage house. A hotel in Nashville became famous for its brewed coffee . . . The Maxwell House.

Other early hotels in Nauvoo lodging were the Mansion House & the Nauvoo House. Once construction was complete the advertisements for the new hotel went out: "This house is now neatly fitted up and in first-class condition. Customers and travelers will find it an excellent stopping place." While the Temple House served hotel guests upstairs, the main floor was used for various businesses such as the printing office for the Nauvoo Independent Newspaper and a General Store. Travelling salesmen had a reserved area where they could show their goods. The larger northeast room was once used as Nauvoo's first and only indoor roller skating rink!

Eventually Mr. Baumert’s son purchased the building and portions of it were converted into much needed small family apartments. Mr. Baumert and his wife, Estella Clark Baumert, lived in one of the apartments in the rear of the hotel. Estella's father was one of the chief stone cutters on the original Nauvoo Temple and it is believed that it is he who built and installed the windows.

Over its 140 year history the Temple House building has been cared for tenderly and repaired when it could be afforded. In 1983, while some wanted to demolish it, Robert Cook purchased the old, tired hotel with the intention to keep it from faltering to progress. Thanks to his love and tireless efforts the building was saved and placed on the National Historic Register.

The hotel closed its doors in 2007 for major renovations. Nauvoo Temple House emerged with stunning ambiance while maintaining its history firmly intact. In the grand celebration that marked its re-opening, the Nauvoo Brass Band played patriotic songs while the mayor and other city officials cut the ribbon. The hotel was then "open for business" to the delight of hundreds of citizens. Nauvoo Temple House is situated on nearly two acres of huge 100 year shade trees and boasts a Pioneer Village, the flagship Zions Mercantile General Store, and the world class Temple House Gallery. Nauvoo Temple House welcomes guests from around the world as they enjoy the wonderful history and ambiance, as well as the unmatched views from the historic windows of the beautiful Temple House building.